God has called us to reach the world. In His sovereign providence, He decided to bring most of that world to the United States.

Missions is in the forefront of my thinking. It has been since my first year at Baptist Bible College. During a missions conference, I declared my willingness and readiness to go wherever God called me. At the time, I was thinking of China or India or some other far-off land where I could be a pioneer for the sake of the gospel. Instead, God led me to Detroit.

Three years in Detroit were followed by six years in Saginaw, and then 21 more as a pastor in Auburn, Indiana. Although I participated in more than 20 overseas missions trips during those years, God never led me to a full -time role on a foreign field. I thought that was changing when I left the pastorate two years ago to join ABWE, a global missions agency serving in about 70 countries around the world. 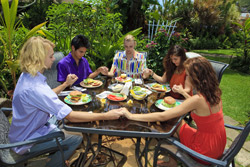 Nope. God had other plans. Instead of training leaders and developing churches in some remote corner of the globe, I am engaged in raising up leaders and churches right here in the United States. It doesn’t always feel like missions, but it is.

And that’s part of the problem. In many cases, we would rather feel missions than participate in it. We’d rather fund a missionary in Africa than reach an African who lives across the street. We’d rather give money than invest our lives. We’d rather change vacation plans than radically alter the way we live. We’d rather lead our churches to care about missions than be a church that’s on mission. That must stop.

We no longer have to settle for feeling good about missions. We can be participants. It doesn’t have to be a two-week trip of a lifetime. It can be our lifestyle. It can be the every-day heartbeat of our church ministries.

God has called us to reach the world. In His sovereign providence, He decided to bring most of that world to the United States. Regular Baptist Church Planting is committed to helping you reach the world right where has God placed you. We want to assist you in doing missions, not just supporting it. We want to give you the resources you need to make missions a reality in your own backyard.

For more information or to set up a consultation contact me at cjewell [at] garbc [dot] org.

"Living Is Killing Us"

The human condition is fatal. Yet there is a uniquely Christian way of thinking about death: "You have delivered my soul from death” ...more

The idea that shame has no place at all in the life of the believer says too ...more