Terry Forrest wants to plant a Regular Baptist church in Byron, Minnesota, primarily to reach Millennials, but also to give his kids and grandkids a church to attend. And after that’s started, he wants to plant churches in the surrounding communities as well. 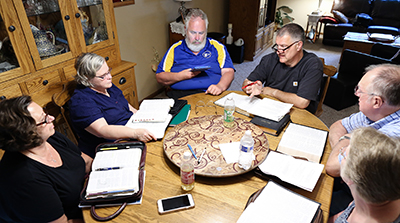 Terry Forrest wants to plant a Regular Baptist church in Byron, Minnesota, primarily to reach Millennials, but also to give his kids and grandkids a church to attend. And after that’s started, he wants to plant churches in the surrounding communities as well.

With assistance from Pastor Dwight LaPine and Calvary Baptist Church in nearby Rochester, Terry is seeking to plant a church in this south central Minnesota community with a population of about 7,000. “There are a lot of people who drive the eight miles to Rochester to go to church, but there are a lot of people who don’t go at all,” Terry says. “There are people here who are starving for a good Bible believing and teaching church, and we want this one to be a GARBC church.”

Last fall, Terry approached Pastor LaPine about his personal burden for starting a church in Byron. “I told him, ‘I don’t know if I’m going to be the pastor, but I can get it started.’” Pastor LaPine agreed to help Terry and send people from his church. The Byron church plant is asking people from Calvary to commit to attending for three years. “When we do an official launch, that will help us be successful from the beginning,” Terry says. “That adds strength.”

Terry, age 59, is not a typical church planter, and that should inspire other laypeople who want to follow in his footsteps. While he has  Master in Theological Studies and Master of Divinity degrees from Liberty Baptist Theological Seminary, Terry is a former Roman Catholic and retired IBM programmer with little ministry experience. “However, my many years of business and entrepreneurial experience provide me with tools to help tackle this kind of work for God.”

Right now, Calvary Baptist has a group of volunteer members who are attending a Tuesday night Bible study in Terry’s home with about 12 members of the community. “This community is full of Millennials, and since we want to reach them, we have agreed that we will do things that focus on them,” Terry says. “Young adults who need the gospel are often willing to respond to Biblical truth if we explain it in a manner that helps them understand how it affects their lives and the lives of their families. Their community is what matters for them, and if we can help them meet the needs of the people around them with the gospel, we have done our job.” 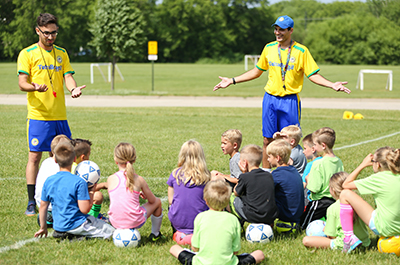 One way to reach Millennials is through their soccer-loving kids. About one year ago, Byron built a soccer complex on the north side of town. Terry started a soccer club with the goal of sharing the gospel and pointing families to area churches. “We started with 135 kids, and now we have more than 600 who play,” Terry says.

During the second week in June, the church hosted a free three-day soccer camp complete with professional coaches from Brazil, training, games, snacks, and a gospel presentation. The format is play, snacks, gospel presentation, and then play some more. “We point them to Jesus and ask if anyone wants to know more about Him,” Terry says. “We usually have about six kids who respond, and we get the parents involved in that process.”

The church is trying to connect to the community in other ways as well. For the upcoming Good Neighbor Days celebration July 19–23, Terry says volunteers will be walking the festival parade with a float that will feature banners about the church. “We will be handing out flyers for the church and candy to the kids. It’s a good way for us to greet and meet and shake hands with people, and let them know that the church is active and viable,” he says.

In the meantime, Terry has an “army of volunteers” from Calvary Baptist in Rochester who are hanging flyers and knocking on doors every Saturday in the community. Terry also has a group of 18- to 25-year-olds who are involved in personal evangelism and are actively reaching out to young people in their age group.

Terry has a tentative date in mind when he would like to launch the church, but he wants the church to have about 100 people before the launch. “We are approaching 30 now,” he says. “Things are looking positive and everyone is excited. No matter how excited we become, this work is all in God’s hands and in His timing.”

Next post Churches Partner to Reach Millennials in Minnesota

Are your Bible studies full of fresh concentrated truth? Three reasons why they should ...more

Perspective: Finding Contentment in an Age of Cynicism and Comparison