Christians and churches have a tendency to be inward focused. It's time to bust out of our circle of complacency and engage in a rescue.

I had no idea how long she had been facedown in the water. My three daughters were playing in the kiddie pool. I was one of four adults standing in a circle around them. Most of the time we were watching closely, but somewhere in the midst of our conversation, Erica decided to do the dead man’s float. In that moment, I couldn’t recall how much time had elapsed since I had last looked down at the kids. I was horrified. She might have drowned while I was standing no more than three feet away. I jumped down, grabbed her, and lifted her to safety. Her cry sent waves of relief through my heart and mind. I’m still haunted by the possibility that she could have died that day while being surrounded by the four people who loved her most. 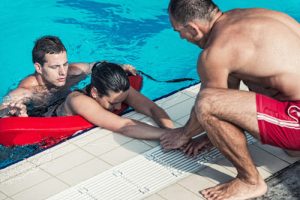 Another thought haunts me more. Every day I pass within three feet of countless people who are separated from God—on their way to an eternity without Him. I’m so busy with my daily routine and responsibilities that I don’t even notice them. They are facedown in the water doing the dead man’s float, and just like that day at the pool, I can’t remember how long it’s been since I really looked at them. It’s time to pay attention.

Christians and churches have a bad habit. We have a tendency to be inward focused. We are so engaged in conversation with each other that we don’t really see the people who are facedown all around us. It’s time to bust out of our circle of complacency and engage in a rescue. That means using words. That means sharing the gospel.

That’s what drives Regular Baptist Church Planting. We are vitally committed to starting churches that reach people who don’t know Jesus. We don’t want to reshuffle the Christian deck; we want to rescue those who are facedown in their sin, drowning in the pool of their own guilt, shame, and unrighteousness. With that in mind, we want to help you really see the people who live around you—to understand the cultural context in such a way that you can establish a rescue operation centered on the person of Jesus Christ.

If you’re serious about evangelism, contact me at cjewell [at] garbc [dot] org. Let’s break away from the everyday “church” conversations and take a good look at the people who live just three feet away. We have no idea how long they’ve been facedown in the water. Tomorrow may be too late.

"I still firmly believe that the mission and ministry of Regular Baptist Press is vital, and I am praying for God’s sustaining and empowering work ...more

VBS 2023: Welcome to the World of Dinosaurs

Online Meetings Share Mission and Purpose of the GARBC

Online meetings with GARBC administrative leaders are helping pastors better understand the purpose and ministry of the ...more