One of my greatest regrets as a pastor is the way I focused on succeeding as a leader. I was so concerned with my own performance that I failed to invest adequately in elevating the performance of others.

One of my greatest regrets as a pastor is the way I focused on succeeding as a leader. At first glance, you may assume that’s a typo, but let me explain. I was so concerned with my own performance that I failed to invest adequately in elevating the performance of others. Yes, I invested in board members and our church staff. But I gave more attention to how this elevated me as a leader than I gave to their development and growth. If that sounds convoluted, that’s because it is.

I was several years in as the senior leader before I even realized how self-centered I was, and how much damage I was doing to the growth of our church and our potential impact on God’s kingdom. I’m ashamed to admit it took some good friends joining forces with the Holy Spirit to take me out behind the woodshed for a good old-fashioned whipping to get my attention. It worked, but I can never recover those lost opportunities. 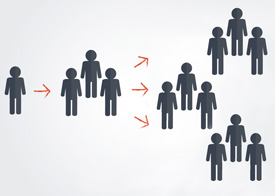 My prayer is that at least one leader who reads this will learn from my mistake. We need pastors who will raise up and release more pastors. We need church planters who will do the same. But that won’t happen if leaders are paying more attention to their own performance than they are to the leaders God has placed around them.

As I look over the spiritual landscape of North America, and the tremendous need for established churches to be revitalized and new churches to be planted, it’s obvious that we have a dearth of leaders. That won’t change unless we prioritize the mentoring process, until we take up the mantle that was passed to us and train up others to do the same.

Next post Giving Their All to California's Central Valley

It’s risky to run on empty—to just keep going with no assurance you will complete another mile. Yet we often do this in our lives ...more

GARBC National Representative Mike Hess had the privilege of speaking at the Growing in Leadership Conference at Impacto Bíblico Iglesia Cristiana Bautista in Santa Marta, ...more

Gracious. This word covers a lot: kindness, courtesy, good taste, tact, compassion. Today churches need to be gracious in every avenue of ...more

Open Mike: Reengaging with the GARBC

By Mike Hess If you’ve been in any kind of relationship, you probably know what it means to drift apart. The phenomenon of social media has ...more